I am about to shake up your world with how different the scenery in the state of Oregon can be. If you haven’t read Part 1, you definitely need to. Oregon is very diverse and, as you will see with this post, it changes very drastically. The thing I love most about this part of my trip was the history of geological changes you could see with your very own eyes. Oregon used to have an EXTREME amount of volcanic activity and McKenzie Pass, the route I took to the coast, is a great highlight of this geology. I don’t want to bore you with my “nerding out” on geological phenomena, but it was seriously amazing.

Aside from the cool geology I was really lucky to take a camping road-trip with my dad. It turns out he’s been one of my best personal adventure photographers so far (see below), and also one of my best inspirations for adventuring. When it comes down to it, I probably wouldn’t have even gone to McKenzie Pass if he weren’t with me. Here is a map of the area we covered, which was mostly in Willamette National Forest. Again, it’s very diverse.

After we finished our hike near Tumalo, as mentioned in the previous post, we headed North on Highway 20 toward Sisters, which is also a cute little town to make a quick stop at if you have the time. Three Creeks Brewery is located in Sisters and it has THE BEST clam chowder I’ve ever tasted, and I’m not even exaggerating. Everyone in that area knows about it, talks about it, loves it. Not to mention their motto is “Blaze Your Trail” and their apparel is focused on active, outdoorsy people which is perfectly fitting for some of us adventurers. Check it out.

After Sisters, we took the 242 West toward McKenzie Pass, or more specifically the Dee Wright Observatory. Disclosure: this isn’t one of those star observatories most of us are used to. You’ll see what I mean. Going through the McKenzie Pass scenic byway can sometimes be tough, a lot of the pass is closed during the winter and this most recent winter was a doozy. It was apparent when we started to get to the higher elevations of the pass because there were still patches of snow on the sides of the road. Mind you, I was just coming from 90 degree heat.

The observatory itself was not what I expected at all. The idea of it was actually very cool and interesting. It was built in the 30’s by civilians and it was constructed using all of the surrounding lava rock, so it fits right in with the scenery. It sits up just a bit higher than the surrounding lava ground and when you walk up the spiral staircase to the top, you can step inside and view the surrounding mountains through little “windows”

The other part of the observatory that is also interesting is the guided education trail they created through the lava, also using lava rocks. At certain points on the trail, there are little readable signs explaining some of the lava formations that you are witnessing. The most interesting part to me was you could very obviously see the borders of the separate lava flows that converged over the area. The other most interesting part was the ability of life to continue growing through a natural disaster like volcano eruptions. If you’re a geology nerd, this is the place for you.

I can’t tell you enough, how much I want to eventually backpack the PCT. It’s one of my biggest bucket list goals to complete. So of course, after the observatory, I made a stop just a mile ahead at the trailhead listed on McKenzie Pass. The PCT kind of crosses along the highway here and then makes its way back up toward Mt. Washington. This section of the PCT was absolutely unique and I think you all should check it out. It was like walking on a runway of lava.

Also check out the cool snow patches we found along the trail. 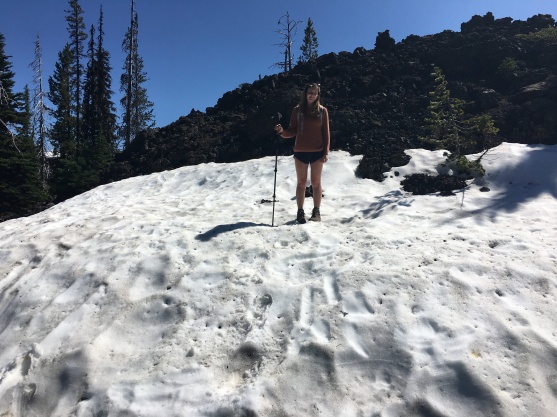 We didn’t hike too much of this because we were totally beat. After hitting three major spots, we were ready to find a campsite.

My motto for finding a campground is keep looking until you find the perfect site. Since it was mid-week, I wasn’t too worried about snagging slim pickings and I was right. Clear Lake is a perfect weekend or day spot for avid fishermen or fisher-women. I didn’t get to spend much time here, but the sites were all in the trees (if you don’t know this about me already, I am a forest-dweller so this was necessary). It has a trail that goes around the lake and has conveniently located fish-cleaning stations. And it looks exactly like its name— a clear lake. Crystal clear, actually.

It’s located along highway 126, which so far is my favorite part of the trip altogether. It includes your stereotypical PNW, Oregon scenery. And although we didn’t spend much time here it was enjoyable for the night. 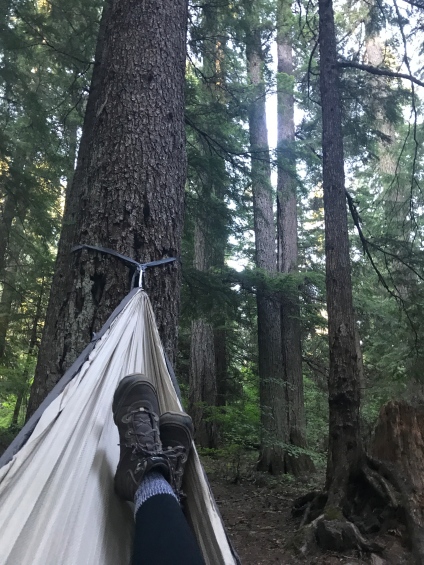 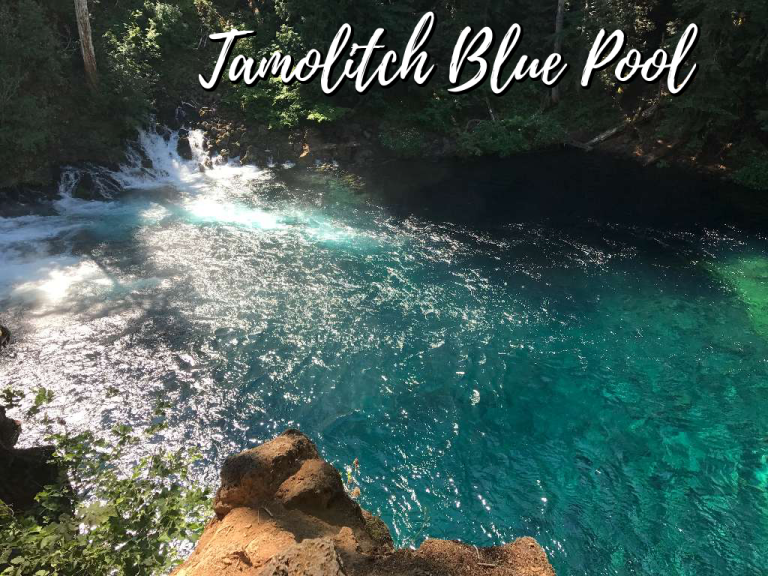 What people don’t know is that Tamolitch Blue Pool, while very gorgeous and unique, is also very popular. Since it is an easier hike to do, there are always lots of people on the trail. I highly recommend hitting this trail very early in the morning, especially so you can see the blue pool with the correct amount of lighting.

It’s located on a section of the McKenzie River Trail in the Trail Bridge campground that’s labeled as “closed” because it is under construction. The trailhead itself is still accessible though, especially for this Blue Pool portion.

There aren’t any significantly steep climbs or descents on this trail, but for some of it you will be along the cliffs that drop off to the river. It makes for some great trail views. The thing I liked best about this hike was that the trail itself had so many great photo ops. It was an all-encompassing hike for me. Trees, the sound of a running river, and an end view— these are all major pluses for me. I mean, just look! 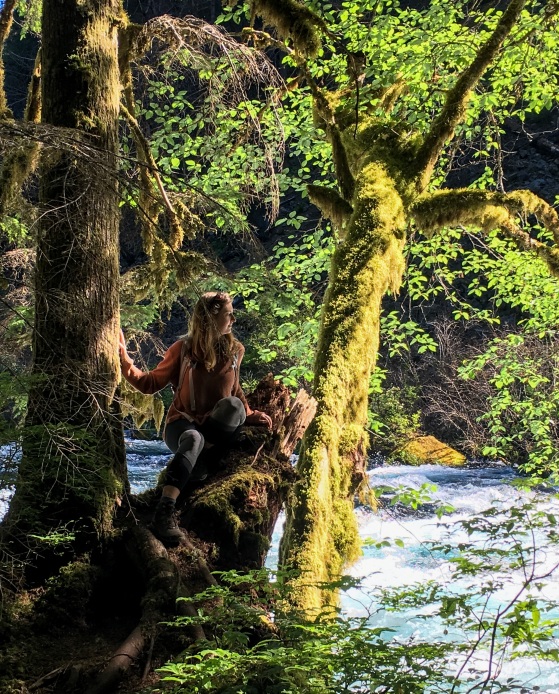 When we reached the Blue Pool, I almost questioned whether it actually was really blue or not, because the morning reflections didn’t really allow my eyes to see the blue that well. But it definitely showed up in the photos I took.

On the hike back we started to notice the heavy traffic of people that is normally expected, so again, GO EARLY!

After Tamolitch, we headed to Camp Sherman to check it out. On our way We caught a great sight of Mt. Washington, so naturally I needed to stop for pictures. And then we continued on.

I’ll warn you right now that Camp Sherman it wasn’t my idea of a great spot, however if you are a fly fisherman, this is going to be a spot you mark on your list. Most of the campgrounds in Camp Sherman and most of Camp Sherman in general is centered around fly fishing. There is a major fish hatchery located here called Wizard Falls that releases trout of all kinds, kokanee, and also Atlantic salmon into the Metolius River. Again, great fly fishing.

I spotted several campsites right along the river that were held by some avid fly fisherman. I could tell they were posted up for the week, wearing their waders and fishing away in the river right along their site. My dad basically said this was a fisherman resort. I haven’t quite dabbled in fly fishing yet, so for me this area was just a nice place to stop and look.

Along with great fly fishing, the main area of Camp Sherman is great for a family summer vacation. They have RV areas, cabins, and a main general store that has a connected cafe, post office, and tackle shop. We stopped to eat lunch here and grab some miscellaneous snacks and drinks. After we ate, we headed on toward Marion Forks to go campsite searching.

Overall, this place was a little too much like urban camping for my style, but it is nice for fisherman. 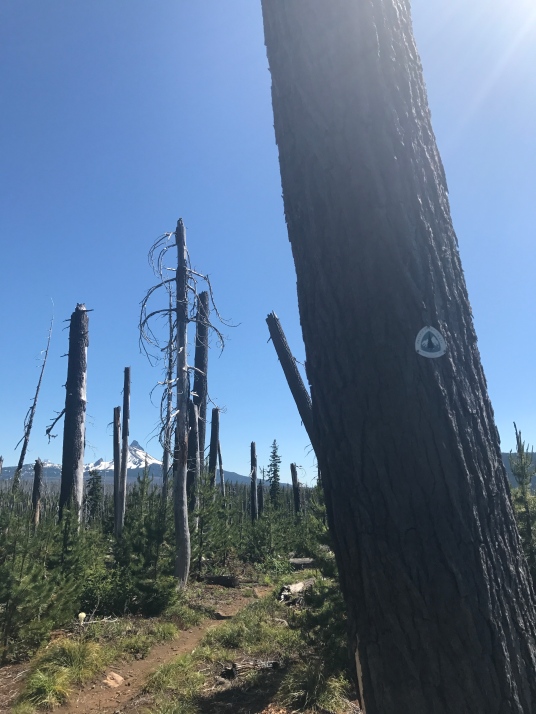 Before finding our campground for the night, I needed to make just one more stop. A major PCT trailhead at Santiam Pass. In contrast to the one near McKenzie pass, this one looked like something out of Dr. Seuss. It’s actually pretty amazing how secluded each of the PCT sections were. I felt eerily alone. I didn’t hike much of it, but this portion was very gorgeous. #PCTobsessed 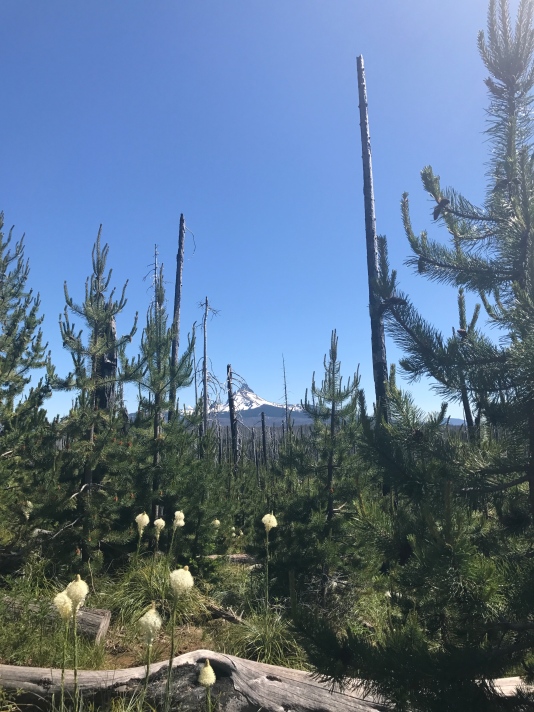 After that quick stop, we continued our search for the perfect campground. I think that for how late in the day it was, we weren’t expecting an amazing site. We almost grabbed a couple that looked okay, but I was confident we could find an awesome site for our last night on the road.

We finally turned into a campground called Riverside Campground. Don’t mistake this for the possible many others named this as well. THIS one is located near Marion Forks, OR. And it ended up being possibly the best campsite I’ve ever stayed in. The site we found was right on the edge of the river but edged up on a short cliffside. The sites weren’t squished together and we couldn’t visibly see a site near us.

It was green, it was mossy, and it was right next to some great outdoor sleep sounds (aka the river). I was really stoked on this spot. I found two perfect trees to hang my hammock on, overlooking the river, and a nice flat spot to pitch my tent on right next to some mossy forest floor. Did I mention this spot was perfect? 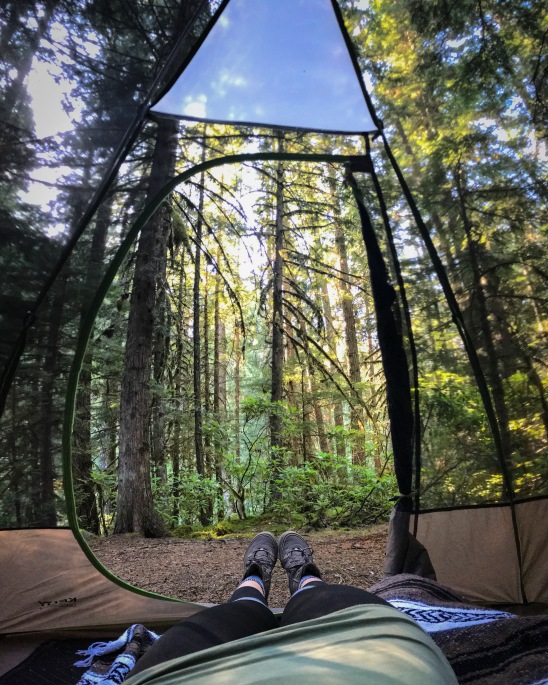 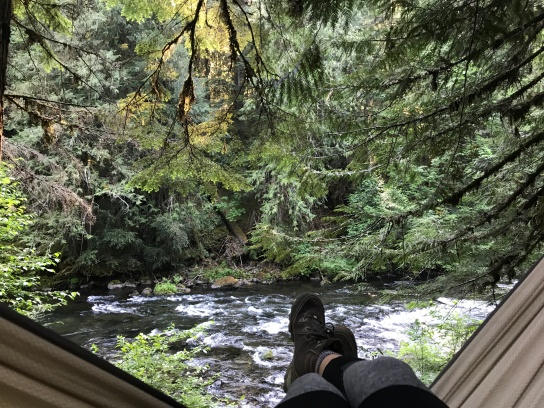 Mostly, it was a great reward for a short little camping roadtrip. So if you are thinking about exploring Oregon, GO!